Organisational change management is crucial to business change and particularly to those projects that involve technology. This article is the first of three building on my previous MBA research and looks at some key theories of change. The second article reviews step by step models to implementing and the third proposes a hybrid approach to achieve greater success.

Why change fails?
Kurt Lewin in 1947 introduced the phrase “resistance to change” and it has grown into the almost universally accepted axiom that “people resist change”. However, John Kotter (as known by many for his Harvard Business School books and articles) asserted that individual resistance is actually quite rare. Instead, he suggests that obstacles to change more often reside in the organisation’s structure or in its performance appraisal or compensation system, which are not yet aligned with the desired new behaviour.

People do not necessarily resist change, but instead resist the possible loss of status, pay, or comfort associated with the change. This is further worsened by fear of the unknown. Fear about how they might be impacted, how their routines will be altered, how their job might change. Whilst many of these fears are likely to be unfounded, in the absence of information, people will invent concerns and imagine the worst. So involving employees at every stage and providing clear communications of how they will be impacted is essential.

Ultimately, business change is an alteration in the work behaviour of people. Failure results from not having a new work environment well defined, and not updating the skills and attitudes of employees to take advantage of that new environment. This includes such things as not having new processes in place, not adapting the structure of the organization to the new ways of working, not revising incentives and rewards to emphasize new goals, and keeping the old cultural practices in place even when they impede the new ways of working.

In order to be more successful at organisational change management it is helpful to first understand some basic change theories.

Planned vs Emergent Change
This HBR article by Beer & Nohria – “Cracking the Code of Change” argues that there are two types of change – top down (or planned) and bottom up (or emergent). 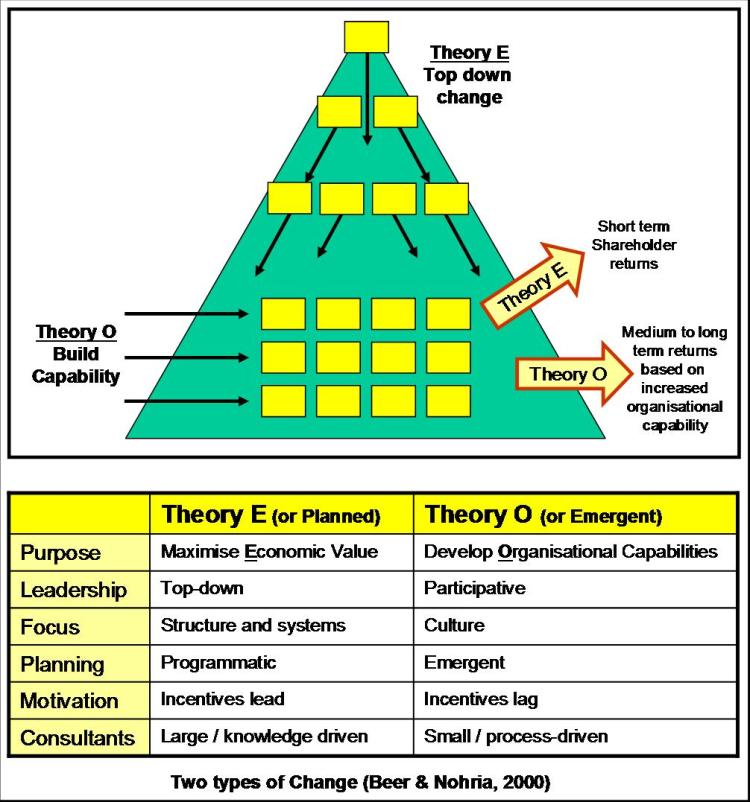 Planned or Top-Down change is what many people immediately think of when change management is mentioned. This is the traditional, Management driven change, pushed down from the top, most commonly found in market driven economies such as the UK and USA. This tends to focus on short term programmatic changes to organisational structure or systems, in order to generate economic value for the company. However, once the driving force is removed the Organisation will often try to revert to its original state. The main reason is usually that the underlying culture is not aligned to the revised situation.

In contrast Emergent or Bottom-Up change is more participative in nature and allows the employees to define the change, thus making the end result more emergent. In this type of change the Management can only put in place appropriate circumstances and encourage the change, but have limited control in order to plan or manage it. The type of change that results develops the organisations capability and can also change the culture. Whilst being difficult to control this type of change has the ability to deliver substantial benefit to the company, leading to long term results and strengthening of the enterprise. However, culture change can be unpredictable and deliver unexpected results.

The key to success in organisational change management is to start with a top down change but then to anchor it in the culture in order to perpetuate the new reality.

Beer & Nohria warn that it is important to avoid trying to implement both types of change simultaneously as there is an inherent conflict between the two, with Top Down change often destroying organisational capability as the organisation restructures, whilst the Bottom Up type change is trying to build it. Many of the most successful changes have combined the two approaches by seeking short term gains via a planned change, and then using a longer term emergent approach to reinforce it, embed it in the culture and increase the organisational capability.

Summary
A change that tries to involve employees and alleviate their fears and concerns is far more likely to be successful. One that goes further and utilises the Top-down vs Bottom-up nature of change has a very real chance of delivering lasting results.

The second article in this series of three, “Change Management (Part 2) – Step Models of Change” takes a look at some of the most popular approaches to implementing organisational change management.

This site uses Akismet to reduce spam. Learn how your comment data is processed.